Bill Hicks
"Use every man after his desert, and who should 'scape whipping?" 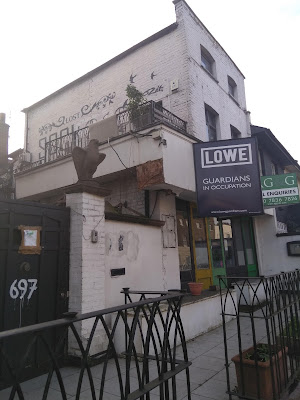 Is this the end for the building that once housed the famous Tearooms des Artistes?
This entry comes quite soon after the last one, which I hope is not too much of shock to my readership. The reasons for this hasty posting will become clear.
Passing the still intact Tearooms building at 697 Wandsworth Road for the thousandth time since lockdown, I noticed something distinctly sinister.

Tied to a signpost there's a laminated notice, stained by rain and rust, but still legible.

It was one of those Lambeth Council Planning Permission notices which, when you see them, you instantly know another beloved local feature will soon disappear to make way for yet another apartment block.

The notice looked like it had been there for years, so I thought maybe those developers had had second thoughts. 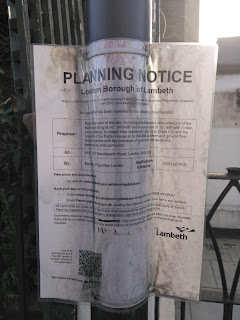 No such luck. I took photos and read it at home, with a sinking heart. You can read the whole thing on the Lambeth Planning Applications database - including around 100 supplementary documents, as well as 8 comments (all in favour). If you don't have the time, here are a few crucial points:

"20/01227/FUL | Redevelopment of the site, involving refurbishment and extension of the existing building at no: 693-695 and replacement of no : 697 with 3 new storey building to create nine residential units (Use Class C3) and the retention of the Public House at no 693-695 at lower and ground floor levels, together with the provision of cycle and refuse stores, landscaping and courtyards. | 693 - 697 Wandsworth Road London SW8 3JF

In its final incarnation it was a nightspot, the Artesian Well, a place which specialised in lavish faux-Bohemian decor and (according to a friend, who went once) a clientele including many public school kids from Surrey who were competing for their Duke of Edinburgh's Award in decadence. But maybe this is unfair. It was certainly extremely popular right up its demise in 2014, seen by many as the interesting face of Clapham nightlife, as opposed to the meat-market reputation of the High Street clubs.

The second building, at 697, was the Tearooms des Artistes, a place which was known and loved by many from the early 80s through to its demise in around 2006, when it became a posher and more pricey bar called Lost Society, which lasted another few years. Since 2014 it's been left in the hands of Lowe property guardians, and looks little changed.  Well, at least it is providing some genuinely affordable housing.
I shared some of my own happy memories of this place a few years ago, and was delighted when several others added comments and  links to more info on this lost gem of south London's alternative hospitality spots.  Some great memories emerge, including the fact that the late Marc Bolan's pink Bentley was parked outside for a long period in the 90s.
I have to thank Baz for some amazing info, including some history he found on the Wayback Machine web archive, which suggests the building went back to the 16th century, when it was a barn on the Clapham Manor estate (any further info on this would be amazing). Baz also built a site for the Tearooms, and some of his extremely evocative photos - can still be seen on the Wayback Machine, here - including bits of the ancient structure. Surely evidence enough to slap of high-grade listing on this building!
One attempt to redevelop was kicked out by Lambeth council in 2015. The new application, from April 2020, still awaits a decision.
The architects for the developer and would-be demolishers, Marston Properties Limited, are dismissive of the old building. It's useful to quote their reasons at length:
"At ground floor the fascia and shop front has been completely replaced with modern fabric of no visual or architectural merit. In the process, a large steel beam was inserted to open up the shopfront which was used as ‘Regional Tyre Services Ltd’ in the 1960s-70s, which has subsequently resulted in structural damage to the façade.

"There are no features of merit internally.

"At most the building makes a neutral contribution to the character of the conservation area. It’s (sic) relationship within the streetscape is awkward; it lacks connection with the terraces to the west and the former Artesian Well to the east.

3.28 Given the assessment that the building is at best a neutral contributor with many detracting elements (shop front etc.), Heritage Collective concludes that overall the high-quality replacement building as proposed would represent an enhancement of the Conservation Area.

Even if the Council remains unconvinced in this regard and retains the stance that the building is a positive contributor, its loss as proposed is acknowledged by the Officers to fall within the less than substantial harm category.

3.29 In such cases a weighing exercise is required setting on the one hand the less than substantial harm and on the other the public benefits that flow from this scheme. In this case the benefits include the redevelopment of a poor quality redundant site, removal and replacement of harmful features, poor quality windows, railings etc., securing a beneficial and long term future for the site, the re-opening of a community facility (the pub), the provision of nine new high quality homes and the delivery of a highly efficient, sustainable new building..."

And so on, and on, and on. Thus do developers nail all opposition to the floor, thrashing them with fine phrases and vacuous arguments.

Not that the quoted "Heritage Collective" is a consultancy, not to be confused with an official heritage body.
Quite what a "neutral contributor" to the conservation area means is unclear to this writer at least. To us, and anyone who once visited the Tearooms at any point through its various phases, from hippyish vegetarian restaurant/wine bar/club to the après clubbing chill down nest of Sunday best in the 90s and 2000s, the sight of this unique place is a blessed reminder of a more interesting Clapham, before the anodyne clumps of tasteful luxury apartments started popping up like weeds.
The application was still active in January this year, when the architects submitted some modifications to their designs. All of these are available to view on the planning archive. According to the website the application expires on April 15.
It's too late to submit objections, but I do wonder why the wealth of history associated with these buildings seems to be entirely ignored in this application. I wonder if any archaeologists have ever been there to look for some Tudor era oyster shells....
Posted by Bill Hicks at 04:47